“ I was under intense pressure and feared studies being aborted due to tradition of early marriages. But thanks to Umang, that gave me courage to speak to and convince my parents and I am back in school. ”

“ I had fallen prey to tobacoo chewinhg and I wanted to leave this bad habit. One day got to attend Umang Session on addiction and decided to exercise restraints. I feel so relieved now.”

“ I was passing through a difficult period. There were several health issues, but I was not able to get any guidance. Then I attended LSE Umang classes. It resolved most of my doubts. Thanks to Umang.”

“ The family matters had lead to extreme mental stress and I was in bad condition. The session on Fighting Depression gave me all the strength. I gradually built up myself to come out of the clutches and I feel so thankful to LSE programme. ”

“ I was named most arrogant boy in class. It was my own attitude separating me from friends, I realised. Umang taught me Anger Management and that did wonders. My bahaviour changed and all friends came back. I am so happy.” 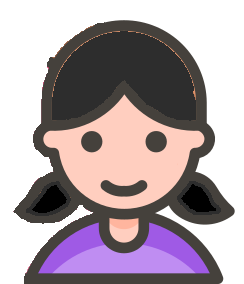 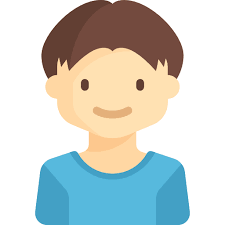 There are numerous success stories, reported and unreported. Some are being shared here by:

Getting rid of addiction

Adolescents often get into trap of bad habits, as they tend to try things and then get addicted in a while. Salil [changed name] a students of standard 11, in Neemuch, used to spend time loitering around in village with his friends. He also took to tobacco chewing and several such unwanted activities. He knew it was wrong and wanted to leave all this, but it was too late. Coincidentally he attended a session on Addiction and that made all the change. He got the knowledge that one may come of the the clutches of such evils also, all that is needed is determination and strong will. He soon decided that he would not take tobacco come what may. His firmness did the wonders and he is no more an addict. Salil is back in school with full enthusiasm and has become a sincere student. He thanks Umang that had showed him the way.

The 16 year girl Nidhi, of class 12, Neemuch had lost interest in life. Poor Nidhi at age of 14 lost her father and a year later, her mother. Suddenly entire family's burden came upon her. No body seemed to be helping and she resorted to isloating herself from everybody. But one day, in her school there was a Umang session of Communications and the teacher taught them to open out, speak up and develop relations. She got some clues, gained confidence and the least talking Nidhi became so verbose. She would talk to her friends and go and meet people. Sooner she started feeling that she wasn't alone, every one listened to her and sympathised with her. This gave her such a courage that she also became more responsible back home. Her behaviours had totally reversed She now takes interest in studies also and discharges her household duties equally well. Umang fortunately could help her to regain zeal and enthusiasm that was her right.

Rajeev Jatav, 15 year student from Ashoknagar, had given up. 'I was definite that no body liked my views and everybody insulted due to my poor communication ability'.This wouldn't have changed had the Umang session not been there. This resolved his many problems which were solely based on his lack of confidence to speak. He gradually learned to express himself, speak with boldness. This helped him so much that he soon became a good orator, to all his own surprise. He started taking part in annual events in school, presented talks on these and Rajeev is now a completely changed boy. Rajeev says that he didn't know his own abilities and strength and now his ideas impress people instead. This has also aided him to be expressive in classes and he easily raises his doubts and questions. Rajiv feels so obliged and grateful to Umang programme.

The 16 year old Chameli [changed name] was in deep trouble. A roadside boy used to tease her on way to school almost regularly. She was a sincere student and was quite regular, this gave that boy all the more opportunity to intercept her. She was also not able to take help from her parents, as they would have simply forced her to sit back home and aborting her education. She one day happened to learn from the Umang satras the way to solve problems and take help from others, if needed. Taking hint, she first discussed the issue with her friends who also stated similar experiences of theirs, this made them to come together. They shared with teachers who came for all the support and guided them to talk to that boy straight away. The girls together cornered him one day and warned to complain to police if he continued. Feared, he aplogised and then never bothered them and Chameli again. Their Umang lesson had empowered them to fight back and resolve probelmes by themselves.

Fought the Anger, for Friends

The class 10 student, Ashish of Neemuch, had become a synonym for anger in his school. His behaviour was so rude that no body liked to talk to him. He used to engage into tiffs often with classmates and harrass them . The problem with him was that he used to use all the rough language which offended others badly and so they stopped interacting with him. Even when in need, he was not helped by anyone and he now had started realising his mistake. One day, in Umang sessions he learned the Anger Management, which was just the right solution for him..There were simple techniques that he had to practice and that is what he did, very sincerely. He found that he was now able to control his anger, and also his words. He was more gentle with all. This made lot of difference, friends who had left him, started to listen to him and rejoined him in their activities. Ashish could make out that it was only Umang satra that helped him to get this back.

The Life Skills education sometimes helps in safety too. Sadhna [changed name], a student of class 10, from Ratlam was a brilliant girl. But environemnt in her family was not good. Her step mother and father didn't pay sufficient attention to her. Her mother used to also not treat her as a child would expect. She used to feel too lonely. One day from her father's mobile she created a face book account. She also had started to chat. A boy approached her and they became good friends. But the boy had a fake id and she also came to know that he was actually involved in girls trafficking occupation. She was just about to fall into his trap too. But she soon recalled a Umang session from where she had learned about Help Line "We care for You". She called this number to seek their support. By taking quick action, the helpline linked with police deptt. and boy was located and put behind bars. It was Sadhna's alertness, courage with timely action, that helped save her from the mess.

Yogesh Gaud, of 10th, from a village in Harda Distt. had developed a bad habit of taking Tobacco-Gutkha. It increased so much that he became an addict to it. It was also adding a lot of financial burden upon him as he needed 40-60 rupees daily. This was not easy to get so much money on daily basis as his father had poor income from agriculture and the family members were many. In distress, Yogesh also became irregular in classes. He had started borrowing money to meet his demand which further added to his problems. By chance, one day, during a session of Umang in his school, when everybody was sharing personal problems, but Yogesh sat nervous, his teacher could make out that he had some concerns and needed help. He talked with him and Yogesh disclosed the whole issue. Teacher and Principal intervened and resolved by taking his commitment before his parents that he would leave this habit for good. His debts were also cleared by his father. Umang session so helped him, a small step forward cleared all his problems in one go.

The student from Mandsaur, Garoth, named 'Chhoti' [for the story], set a rare example of behaving extremely bravely and regaining a respectable life for herself. She had been a good and well behaved girl. Somehow, one day, a Kirana-man in vicinity got access to molest her and quietly continued his routine. Chhoti was totally shattered. Somehow, little later, she gathered strength and then she decided that she woundn't spare this man for his dirty act. She straightaway lodged a complaint with the police. As the action began, the man started to plead and expressed his aplogy for the mistake. But Chhoti was firm. She knew this is not a matter to be reconsidered and pressed police for next step.The guilty was arrested and put behind bars. Chhoti continued to set her life normal and to her and her community's pride, today she serves as a TV Anchor which is a very big example of demonstrating courage to fight evil and not giving up. Chhoti acknowledges that it was Umang Life skills which actually gave her strength to take a stand and make a come back boldly.

Prabhat Dwivedi of class 11 from Tokri, Sidhi was a notorious student and every teacher had faced some mischief or the other of his. But he was incorrible. He used to create hindrances in class sessions and himself was not at all interested in studies. But his teacher Priyanka Chouhan, had a differemt thought lurking in her mind. As the Umang session have, the abilities in each one may be different, all that is required is to find strengths and apply it rightly to succeed. She had sensed that Prabhat's General Knbowledge was quite good. She marked his this strength and talked to him to compete in GK Quizzes. He somehow agreed with some initial reluctance, and started preparing for it sincerely. He faired very well and won ths school level competition. He felt motovated and then tried his luck at other higher level competitions too. He succeeded there too and won a State level Award in the GK quiz. It indeed was matter of great astonishment and delight together for those teachers who had taken him to be a useless boy. Yogesh changed a lot after this and became a sincere student of school.

A word on Umang's stories

The result/impact of Umang sessions 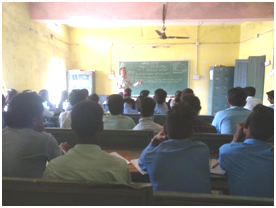 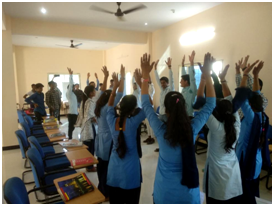 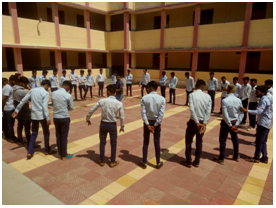 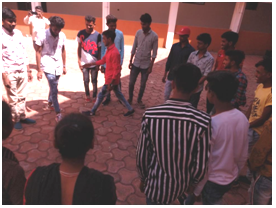 The Umang Life Skills course design has an inherent character of experiential and participative learning.
The adolescent boys and girls learn with applying the skills in playful exercises which give them a mock experience of real situations.
They learn to use the skils and resolve the problems and issues through the course.
This is the basic reason why the students are able to also apply the skills when they face something similar or even with variation, in family/friends and society, in day to day life..

Back to main Page